We use cookies to ensure that we give you the best experience on our website. If you continue to use this site we will assume that you are happy with it.Ok

‘In the bakery it’s hot and a hive of activity’: Sally Hinchliffe, baker, Otley

People thought we were mad, opening a bakery in Yorkshire, in the height of Thatcher’s Britain, when we first arrived in Otley in 1983. Independent businesses were closing down at a rate of knots. God bless Paul Hollywood, but back then the craft of proper baking wasn’t as popular as it is now. My partner Steve and I fitted the place ourselves. We were working on a shoestring, which meant we’d sell through the day and bake through the night. The secret? Well, 35 years later he’s still making me laugh.

When you’re younger, you can do the nights pretty easily. We went to a friend’s 21st birthday party and stayed well into the early hours of the morning before heading back to crack on with the baking – I’ll never forget the sight of Steve falling asleep on the step by the ovens with the loaves still inside. It was quite romantic in those days, being holed up in the kitchen – and occasionally dancing. We built a business together while we built a life. Now we’ve got a team, so our shift patterns vary and it’s a little more professional. But it’s all hands on deck come 8pm on a Friday.

I adore working through the early hours, it’s almost magical. Inside the bakery it’s hot and a hive of activity – music blaring from the radio as we fill the shelves with treats which bring the shop to life. But step outside into the darkness for a moment and it’s serene and silent. In the winter, taking in the icy air and the moonlight can reinvigorate you better than coffee ever can. We’ll always keep the door open if it’s snowing.

In the summer, the birds are there to keep you company as the light starts to trickle over the Chevin. We’ll pop outside together – whoever is working – to look at the sky, as picturesque and tranquil as they seem in Turner’s paintings. The aroma of fresh-baked bread mixed with the morning air makes for a heady cocktail.

There’s always a lull – it hits you at about three in the morning – but we turn the music up a little louder, have a singalong, and then carry on. If I can, though, I’ll head out to do some deliveries in the early hours of Saturday morning. It means I get to drive through the beautiful countryside before anyone else. Of course, if I’m in the van, I’ve got to stick to a schedule. But at the top of the Chevin I’ve been known to pull into a pub car park and take in dawn in all its splendour for a moment. You feel like you own the earth – and it’s wonderful. Not for too long, though, the bread needs to be delivered. And the bakery needs to be open again by 7am. 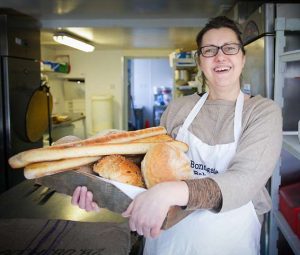 My lightbulb moment: Award-winning baker Sally Hinchliffe, revealed the inspiration behind the opening of her bakery

The Daily Mail Sally Hinchliffe, 54, founded Yorkshire’s Bondgate Bakery back in 1984 She was inspired to make bread without sugar, E numbers or any kind of nasties She won the BBC Food and Farming Award for Best Local Food Retailer in 2004 Sally says… 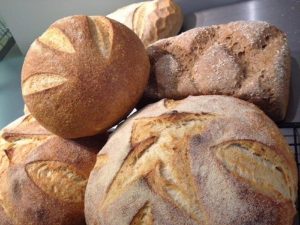 https://www.greatlittlebreaks.com Bondgate Bakery makes a wonderful array of breads every day on site, all of which are made by hand, without the use of pre-mixes or additives. What’s more is that the selection on offer ranges from sourdoughs and rye breads to wholemeal and crusty whites,…